La Pocha Nostra’s trajectory began in the early 90s, much before I entered into the picture. I first met the troupe in 2008 and after collaborating on a series of projects as an associate artist for couple of years I joined as a core member between 2011-2016.

During that period we collaborated on over 30 different projects around the globe, facilitating workshops and presenting performances in several venues in Mexico, Brasil, Colombia, Curaçao, United States, Canada, Slovenia, Croatia, Portugal, Italy, Spain and Germany. (Please see the LPN archive section for documentation on some of these projects)

The work I did as part of LPN was a very significant part of my artistic and political journey as an artist, particularly for introducing me to the term ‘radical ternderness‘ and for helping me connect with the power of performance/art as a radical form of pedagogy, two important areas of my practice to which I have continued to dedicate myself to since leaving the troupe. I am very thankful for the learnings we shared over those years, and for our capacity to acknowledge when our growing required us to part paths.

La Pocha Nostra is an ever-morphing trans-disciplinary arts organization, founded in 1993 by Guillermo Gómez-Peña, Roberto Sifuentes, and Nola Mariano in California. It provides a base (and forum) for a loose network of rebel artists from various disciplines, generations and ethnic backgrounds, whose common denominator is the desire to cross and erase dangerous borders between art and politics, practice and theory, artist and spectator. Projects range from performance solos and duets to large-scale performance installations including video, photography, audio, and cyber-art. La Pocha collaborates across national borders, race, gender and generations. Our collaborative model functions both as an act of citizen diplomacy and as a means to create “ephemeral communities” of like-minded rebels. The basic premise of these collaborations is founded on an ideal: “If we learn to cross borders on stage, we may learn how to do so in larger social spheres.”

La Pocha strives to eradicate myths of purity and dissolve borders surrounding culture, ethnicity, gender, language, and métier. Sadly, at this point in time, these are still considered radical acts.

Below are some of the objectives of LPN’s pedagogical work:

•    To feed / stretch emerging artists and inquisitive students, helping them to sharpen and develop their performance and analytical skills in dialogue with like-minded cultural radicals.
•    To create temporary communities of rebel artists from different disciplines, ages, ethnic backgrounds, gender persuasions, and nationalities, in which difference and experimentation are not only accepted but encouraged
•    To develop new models for relationships between artists and communities, mentor and apprentice, which are neither colonial nor condescending.
•    To find new modes of relating laterally to the ‘other’ in a less-mediated way, bypassing the myriad borders imposed by our professional institutions, our religious and political beliefs, and pop-cultural affiliations. To experience this, even if only for the duration of the workshop, can have a profound impact in the participant’s future practice.
•    To discover new ways of relating to our own bodies.  By decolonizing and then re-politicizing our bodies, they can become sites for activism and embodied theory; for memory and reinvention; for pleasure and penance.
•    To raise crucial questions: Why do we do what we do? Which borders do we wish to cross and why? Which are the hardest borders to cross both in the workshop and in our personal lives? How do we define our multiple communities, and why do we belong to them? What is the relationship between performance, activism, pedagogy and our everyday lives? What about the relationship between the physical body and the social body?
•    To seek a new hybrid and interdisciplinary aesthetic, reflective of the spirit and tribulations of our times, and of the concerns of each participant.
•    To empower participants as individuals to become civic-minded artists.
•    To make performance art pertinent to a new generation of potential activist-artists. They may eventually have to save us from the very monsters and pitfalls that we, their arrogant forefathers, have either created or allowed to happen. 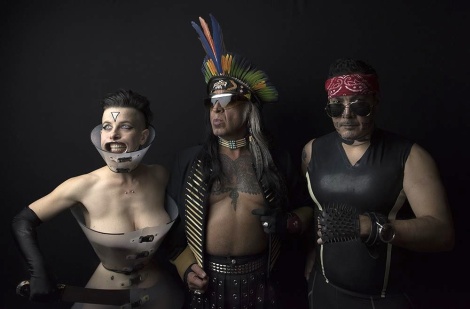