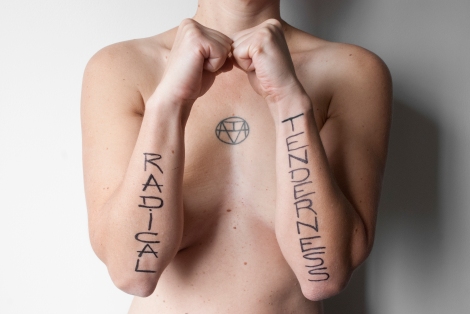 Radical tenderness is a term that I first encountered through my collaboration with the transnational performance collective La Pocha Nostra, with whom I worked between 2008-2016.  The term was used in the context of the radical performance-pedagogy workshops we facilitated, and though it was not clear to anyone what it really meant, it seemed to resonate with a lot of what many of us, within and beyond the collective, were wanting to nurture. From this initial contact with the term, I began a personal journey of continuing to investigate what radical tenderness did for me, with me, what I and others did – and could do – through it … it has been a guiding force within my performance-pedagogy work and my every day life, affecting my relations and mode of being in the world in different ways.

Throughout this journey I have been developing modes of engagement with radical tenderness in the form of performance-pedagogy workshops, performances and embodied critical writing (working both ‘solo’ and as part of different collaborations/collectives).

Please refer to the different sections of my website for more info on each of these practices.

You may also be interested in accessing directly the following links:

Co-sensing with Radical Tenderness is a text Dani d’Emilia and Vanessa Andreotti began to write in 2018, based on thoughts expressed by the collective Gesturing Towards Decolonial Futures [GTDF]. Initially called “An Invitation to Radical Tenderness”, this text has been shape-shifting alongside our artistic-pedagogic collaboration “Engaged Dis-identications”, which attempts to translate post-representational modes of engagement into embodied experiments that reconfigure the connections between reason, affect and relationality. The current version of the text has been revised in June 2020 and is available in two formats, both curated by Laura Daviña from Publicatin Studios São Paulo.

Radical Tenderness Manifesto, by Dani d’Emilia & Daniel B. Chávez (2015): an embodied poetic exercise of resistance where we dive into this seemingly oxy-moronic term asking ourselves: ‘how can radical be tender – and tenderness be radical – in our alliances, our communities, and our interpersonal relationships?’

Radical Tenderness Workshops: these workshops combine performance-pedagogy (performance practice as a pedagogical process of unlearning), radical tenderness (a mode of political-poetic resistance), transfeminist (intersectional and trans inclusive feminism) and decolonial (interrogating colonial legacies on our bodies and subjectivities) approaches. I use these tools to explore ways in which we can create and nurture political-affective communities and alliances that take into account – yet attempt not to reproduce – different forms of violence inherent in our construction as political subjects. Working from the body I explore our ability to perceive others through multiple senses and modes of knowing, inhabiting the contradictions, incoherences and vulnerabilities that arise in the process of daring to blur borders between notions such as identity and otherness, individuality and collectivity, tension and trust.