A SHORT STORY ABOUT A POWERFUL PERFORMANCE MOMENT I EXPERIENCED IN ACAPULCO 2012 …
Update: INDIGOGO campaign now closed, thanks to all that helped us succeed!

As we approach the final 5 days of our IndieGoGo fundraising campaign and prepare for our international tour of Europe and Mexico, I would like to share a story with you, an extract from my performance diary: 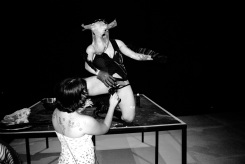 (…) wearing a wax dildo and a pig mask (the skin off a pig’s head) I give myself a few injections, shave my arms and adorn them with pegs as if they were reptile scales or wings.. I light my dildo and invite an audience member to help me wank (blow torching my wax penis, a 7 day veladora). This time the volunteer is a young woman and the action opens up a Pandora box: after some time in the wanking process a woman from the audience comes up to me and vehemently rips off some pegs from my arm, throws them onto the floor and shouts in Spanish “no more violence towards women”.  Very soon one by one various other audience members come up to me ripping more pegs, throwing them onto the floor and shouting “no more dead children”, “no more violence on the streets”, ” no more chopped heads” .. and many more “no mores”. Somewhat magically, as this communal action was taking place the i-pod froze, there was no music for 4-5mins minutes, only peoples voices resonating powerfully in the space. After all the pegs were gone I broke and ate my dildo-veladora, then a young man came onto the platform and took off my pig mask. As I washed my face my assistant and him began to cook the mask with the blow torch.. I had never felt anything like this before. I have always believed in the power of performance as a space for communal ritual processes but this was the first time I felt so profoundly like a ‘vessel’. Somehow I was there, in Acapulco, surrounded by people that had been holding in various degrees of trauma, especially latent due to the violence over the last years, and now we were creating together a symbolic possibility for release and transformation. It was so intense, I was deeply shaken and moved, exhausted and energized at the same time. Once the performance was over dozens of people came to talk to me about their experience – and of course take pictures together. .. Children, grandparents, journalists, peer artists, mostly people had never experienced anything like it before..  Makes me wonder if that is what made it so ‘real’? (…)

A moment like this simply would not happen in a world without La Pocha Nostra.  Times are hard for us all, but we remain committed to our vision of an active, borderless citizenry achieved through radical pedagogy and transformative performance art.

Please help us continue to offer workshops, lectures, writing, visual art and performances to the communities who need them most, by donating to our IndieGoGo campaign.  We are so grateful to everyone who has donated so far, most of our work would be impossible without the compassion and support of our fellow provocateurs.